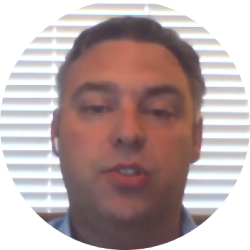 “We did not have to change our performance plan to fit the technology– the technology was able to fit into the plan that we had created.”Dan Myers VP of People and Culture, Symphony Media AI

The OKR methodology can help businesses focus their important goals into precise, achievable, action-oriented objectives. Profit.co’s software guides businesses on this journey, keeping them on track while promoting accountability and transparency within an organization.

We recently had the opportunity to discuss the integral role that OKRs have played at Symphony Media AI with the VP of People and Culture, Dan Myers.

What was the background of OKRs in your company?

Dan was able to speak toward the company’s previous knowledge and experience with OKRs. He revealed that the company brought in this methodology fairly recently, when the business was transitioning from a “services organization to a technology organization.”

Dan knew that this transition required an increase in organization and in alignment. He shared that with “the anticipated growth and process improvement needed to actually make that leap– that’s when we decided that the OKR model best fit our needs”.

What was the drive for OKR Adoption?

Dan shared that during Symphony Media AI’s transition the company had “fairly lofty” objectives. Especially with the shift to remote work in the beginning of 2020, Dan shared that OKRs, and Profit.co, “became a great tool for us… we could still drive the productivity that we needed and it gave us a pretty easy opportunity to not only see what the progress was but also force those more frequent conversations that are really necessary… to fulfill OKRs.”

Dan knew that OKRs were the goal-setting methodology that Symphony Media AI should use, however the choice came down to which platform would allow the company to best adopt this methodology without sacrificing productivity.

With Profit.co, Dan found that “We did not have to change our performance plan to fit the technology– the technology was able to fit into the plan that we had created itself.”

As OKR methodology was new to the company, Dan needed to get his team on board efficiently and effectively. He found that the Profit software itself served as an instructional tool, sharing that “[Profit] really walked [employees] through it and really helped that learning curve.”

How was the OKR implementation process at Symphony Media AI?

With the company-wide understanding of OKRs progressing as the software was integrated into daily life at Symphony Media AI, Myers reflected on the implementation of goal-setting tactics in the past. “Traditional goal-setting had not been working in the past,” Dan shared. “[OKRs were] a great driver for what we were trying to achieve.”

How was your experience with the Profit.co team?

Dan shared about his experience not only with the Profit.co software, but also with the Profit.co team. “They’re very open to suggestion, they’re very helpful,” Dan began. “If there is something that we don’t quite understand, or isn’t quite working the way we thought it would, they work with us to talk through the issues.”

Dan was also able to speak to the adaptability of the product, and the frequency of the updates, which come out every week. “You don’t have to sit there and put a request in the queue and wait for six months– they’ll problem-solve and come up with a solution for what we’re trying to solve pretty fast.”

Did Profit.co help work during COVID?

Additionally, we wanted to hear about the experience that Dan, as well as the entirety of Symphony Media AI had as remote work became a requirement across the world. Dan said that they were actually able to prepare a little more than others, sharing that “We built out our production plan to ensure that we were actually going to be able to maintain the level of productivity we had in the office. The nice thing about Profit was it really helped drive that… we were able to put those plans into an OKR format.”

Dan also spoke towards the usefulness of transparency at a time when work from home is mandatory. “The fact that department heads and myself could actually see into the organization, see how things are progressing, it was nice because we didn’t have the blind spots that we would have if we had not implemented something like this. It was definitely a great tool during that transition.”