Running an organization is all about making choices and making decisions. When decisions are taken at the higher echelons of the hierarchy, they can have far reaching implications and impact. So the more significant the decision, the more sound it should be. There are instances where you make a choice, decide, and move ahead, only to find out later that it did not work and the organization has yet to produce the desired results. During such times it is a human tendency to think back and believe that you knew all along that the decision you made in the past was wrong. This psychological phenomenon is called the hindsight bias.

What is hindsight bias?

Hindsight bias is a cognitive bias that drives one to look back at an event that could not have been possibly predicted and falsely believe that it was easily predictable. As a result, hindsight bias is also known as the ‘knew-it-all-along’ effect and ‘creeping determinism’.

How does hindsight bias work against decision making?

Hindsight bias can have a bad impact on decision making in organizations. While making business-critical decisions, you usually assess the implications of the decisions based on facts and numbers: you make projections and try to foresee the potential impact of the decisions.

However, projections are not necessarily accurate all the time. Sometimes, you may misinterpret them or get them wrong. Sometimes you may have made these projections based on current conditions, but after you proceed with the decision, conditions may have changed, leading to failures. For instance, you may have decided to release a stationery product for school kids just before the pandemic, and by the time the product hit the shelves, the pandemic would have forced the schools to shut. In this situation, failure is mainly caused by external factors.

You may think about the decision and outcomes and the paths you have crossed after taking that decision. With hindsight bias, you would see various signs of failure at multiple stages. You would start to believe you knew it was on the wall. However, you would have spotted these failures only after you had hindsight.

In the example above, there is no way to predict that a global pandemic could force schools to close and diminish the demand for stationery products. But when you look back, you may think about reading about the first cases of Covid in China and you would assume now that even then, you believed that it could impact your business, but you went ahead with the product launch despite that. Due to this hindsight bias, you would believe that you could have completely avoided it.

The hindsight bias affects how you make decisions and has far reaching consequences. It can give a false sense of overconfidence and the capability to predict outcomes perfectly. For instance, after the failure of the stationery product released during the pandemic, now if you read about a flu outbreak in some corner of the globe, you may assume that this could turn out to be another pandemic and you may hesitate to release a product that is ready for launch, assuming that the schools would close down like before and the sales will be affected. In reality, the actual data would suggest that flu outbreaks are annual phenomena; they do not become global pandemics and force the world into lockdowns. In this case, you make a poor decision based on your belief and lose an opportunity to launch a product at the right time, allowing your competitors to capitalize on your mistake.

Book a free demo with our team to learn more about how OKR software can help make decisions to optimize your organization’s performance!

Hindsight bias affects you and your organization by:

1. Giving a false perception that you had predicted an outcome, while in reality, you have reconstructed it only after knowing the outcome.

2. Making you assume that you could have prevented that outcome before it happened.

3. Making you overestimate your ability to predict, foresee and make projections of outcomes.

4. Deceiving you into believing that your decision making is based on your ability to predict outcomes perfectly without the benefit of hindsight.

5. Giving you overconfidence and forcing you to make decisions based on instincts and false perceptions.

6. Reinforcing your beliefs and instincts when your predictions come true by chance.

7. Convincing you to plan for the future based on predictions of past events rather than based on real data.

8. Making you believe that a failure is due to circumstances and has no bearing on you, i.e., that you could not have done anything different when external factors are at play.

9. Preventing you from self-analysis and looking for problems within the self rather than external factors.

10. Making you refuse to take responsibility for any failure you may have caused.

11. Blinding you from seeing alternative explanations and considering other possible outcomes.

12. Forcing you to construct narratives to explain outcomes without concrete facts and evidence. 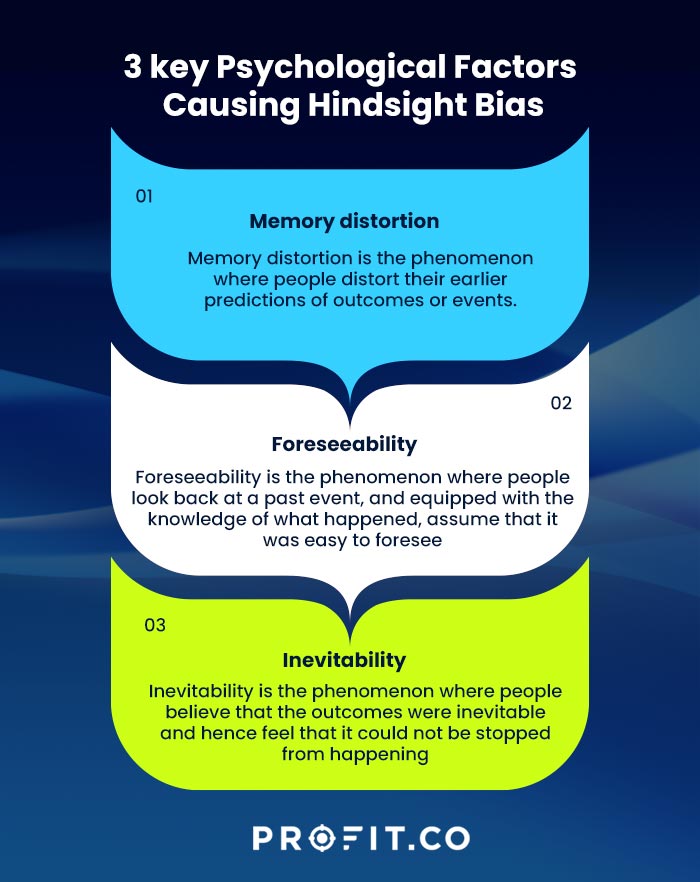 1. If you had set a target of bringing a thousand leads per month through a social media campaign during the last quarter, but you could achieve only one-fourth of your target. During the review, if it was identified that the target audience was not properly identified or if the communication was not proper, then hindsight bias would make you connect the superficial dots around unrelated events, construct them as actual signs of impending failure and make you believe that you had already seen and predicted the collapse of the campaign at various stages, while you would have come to know about them only in the review. So you become overconfident about your ability to predict the factors that could cause the failure of similar campaigns in the future and create the campaign around those falsely perceived risks rather than identifying the actual risk factors for this particular upcoming campaign. This can lead to flawed campaigns and affect your success.

2. During an appraisal, if one of your peers gets more appreciation, bonuses and promotion, you may think back and might remember the scattered instances where that person was casually interacting with the reviewer/manager, say while having lunch together one day, and start to believe that the manager is biased because of their relationship with the employee who enjoyed a much better review. This might give a false perception that socializing with superiors could influence how bonuses and promotions are offered in the organization. When this bias is spread across the organization by word of mouth, it can lead to a toxic organizational culture where employees work to please their superiors rather than produce outcomes.

3. Hindsight can also lead to scapegoating. For instance, if a team leader associates minor errors of team members that are unrelated to the overall outcomes, it can lead to blaming culture and scapegoating of employees who have nothing to do with the failures. It can lead to employee dissatisfaction and employee turnover in the long run.

Three different psychological factors cause hindsight bias. They are:

Memory distortion is when people misremember or distort their earlier predictions of outcomes or events. For instance, if you determine that a colleague must have committed a mistake based on your previous memory, and then later you get the evidence that someone else had made a mistake, then you distort your memory and claim that you knew all along how that person would never have committed an error.

Foreseeability is a psychological phenomenon where you look back at a past event, and equipped with the knowledge of what happened, you assume it was easy to foresee. In reality, without the insights you have now, you could not have foreseen it.

For example, if two people are favorites for a promotion and one of them gets it, a few months after the promotion, you get to see how well that person performs in that role and believe that you already knew, even before the promotion, that the person would be the right choice for this role. However, in reality, you may not have known whether the person could handle the role during that time.

Inevitability is when you believe that the outcomes were inevitable and hence you feel that you could not have stopped it from happening. This gives you comfort and makes you feel free from any responsibility for the event or its consequences.

Cognitive biases are deeply ingrained into one’s mindset and are hard to prevent. However you can take some measures to prevent hindsight bias. Following are some of the ways in which you can address this cognitive bias.

1. Involve other stakeholders in decision making

One of the main problems in decision making is not subjecting the decision to external scrutiny. While it is essential to have some degree of autonomy in decision-making, inviting participation from other stakeholders while taking important decisions plays a crucial role in bringing in alternative views and preventing hindsight bias.

Data plays an important part in running an organization today. When you make your business data driven, all the vital parameters are continuously tracked and measured. So at any given time you will have vast pools of data to analyze, get the right information and insights, make more accurate predictions, and arrive at a decision. When you make business data driven, you can inculcate it in the organization’s culture to create an environment where decisions at all levels are taken by analyzing data and facts. This helps to eliminate hindsight bias at all levels of decision-making.

3. Keep a record of your decision making process

When you make a decision, you keep referring to various information to determine what is right and what needs to be done. When you have a hindsight bias, you refer to wrong precedents and false perceptions instead of facts and data. When you keep a record of the thought process, how you arrived at a conclusion and connected various events and forced unrelated events to your narrative, you can revisit it, analyze it and identify the hindsight bias you have had.

Hindsight bias keeps you fixed on a decision based on false perception. It doesn’t let you analyze your predictions more rationally, and blinds you from possible errors in your predictions. So it is essential to analyze the data and arrive at various outcomes, brainstorm with other stakeholders so that there will be someone who will point in the right direction.

5. Work on learning about your own biases

While making decisions, if you have hindsight bias, you will tend to make predictions and projections with the firm belief that you are perfectly capable of doing that by looking into the past and connecting the dots. The first step to addressing this bias is realizing that you cannot always predict and make accurate projections. Secondly, you must understand that there is always a probability of getting things wrong. Thirdly, you have to approach every decision differently. If you keep past outcomes as a reference point for future projections, it can lead to failures, as the past only sometimes has the key to the future. If you can understand this and start looking into yourself, you can progress in addressing your hindsight bias.

1. What is an example of hindsight bias?

2. What is the difference between hindsight bias and confirmation bias?

Confirmation bias makes you search for information to support your narrative. Hindsight bias makes you believe that you have already predicted the outcomes in the past.

3. What are the 3 levels of hindsight bias?

Memory distortion, inevitability and foreseeability are the three levels of hindsight bias.

Managers and key stakeholders must recognize and address this bias. Keeping biases in check is the way to a successful organization. Learn how OKRs framework can help you focus on executing your goals and help you to systematically address all your biases. You can get started on Profit.co completely free today!