Good decisions play a key role in the long-term success and growth of the organization. But good decision making requires an objective mindset that is free from any biases. Individuals at all levels may have biases and assumptions that come into play while making important, business-critical decisions. These cognitive biases can lead to poor judgment, and convince them to stubbornly believe, without any doubt, that decisions taken based on their judgment are correct.

While many cognitive biases make one deny facts, data, and evidence, confirmation bias actually lets them refer to data, but cherry picks only the evidence that support their assumptions. This can hurt the organization. So, it is indispensable to study human behavior and address the confirmation bias of employees, especially that of the ones who are at the top of the hierarchy.

What is confirmation bias?

Confirmation bias is the tendency of people to look for information that supports their pre-existing beliefs, cherry-pick data and facts to suit their narrative, and interpret and selectively remember information in a way that confirms their assumptions. When you have confirmation bias, you will tend to:

What are the 4 types of confirmation bias?

People susceptible to this confirmation bias may have a belief, theory, or hypothesis, and they will search for evidence to support that. They will tend to ask questions, which will yield the results that they desire. This type of confirmation bias can make people make poor decisions, as they will not consider the complete information but only the information that supports their beliefs.

For instance, if the HR team comes up with two solutions for a problem, say to improve employee engagement, and conducts a pilot study to test the proposed methods, the manager in charge of the team would selectively look for data that would prove that the technique, which is close to their heart, yielded positive outcomes if he has confirmation bias. But when you test two approaches, both could deliver good results, one better than the other. In that case, they will discard the data related to the other method, even if it had produced better results, and select the one they believe to be effective, citing that it has proven its impact based on the selective data.

For instance, suppose the head of a product team suffers from this type of confirmation bias and he firmly believes that the market has needs that a specific feature in the upcoming product will fulfill. But if the latest market study suggests that the feature may have only a small insignificant impact, the target audience needs some other feature to meet their needs. In that case, the product head will keep their opinion. This is because they would interpret their favorite feature’s small, insignificant demand as significant and dismiss the study’s recommendations to focus on a different priority.

People with this type of confirmation bias usually remember and recall selective information. They typically remember evidence that confirms their preconceived notions and beliefs but forget proof that does not endorse them. As a result, they reinforce their biases and indulge in stereotyping. Once they label/stereotype a person or a group, they selectively remember and recall the memories that will strengthen those stereotypes while forgetting any disconfirming evidence.

For instance, when a manager with this type of confirmation bias reviews a team member they believe to be error prone and less productive, they will recall the mistakes the person made throughout their tenure while forgetting the improvements and achievements they may have made in the review period. This will result in the manager giving a negative review of the employee and denying rightful promotions, incentives and hikes and can have far reaching implications within the organization.

This type of confirmation bias makes people go with the flow and believe that the views and beliefs held by the majority are always true, even if it is not the case. This can lead to employees needing help recognizing the problems and sharing false beliefs that most employees believe in. As a result, if they come across a problem that can hurt the organization, say a design flaw in a product, they will not critically evaluate it and alert the employees who can fix it.

For instance, if the company leadership introduces the policy of recruiting more women and achieving the status of being an equal opportunity employer, but the key recruiters conform to the sexist notion that women are not as productive as men and do not deserve equal pay, then it can effectively stop the organization from implementing the policy properly and becoming an equal opportunity employer. As a result, the organization may fail to bring in qualified candidates and lose well-performing women to competitors due to inequality and lack of recognition.

Organizations can set processes in place to ensure goals can be achieved without the influence of any kind of Bias. The time-tested OKR goal management platform can be used to set the process of objectives linked to metric driven key results that decide the progress of a business. To know how you can do that You can get started on Profit.co completely free today!

Confirmation bias examples from the workplace 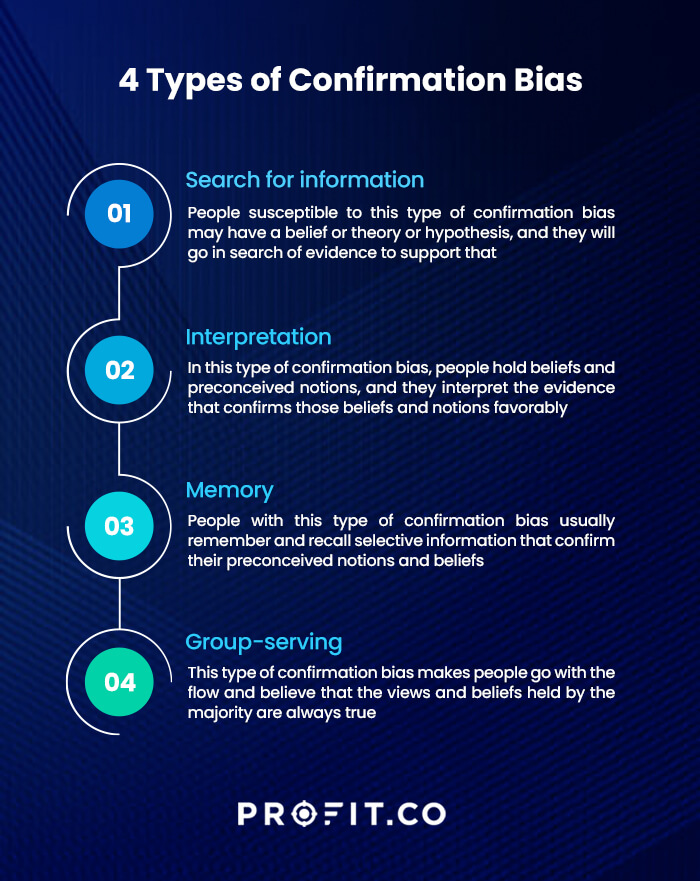 Why does confirmation bias occur?

Following are some of the reasons why confirmation bias occurs.

You can follow a few key ways to avoid confirmation bias.

Organizations must recognize and address this aspect of bias as it can have a far reaching impact on decision making. Keeping biases in check is the way to a successful organization. Learn how the OKRs framework can help you focus on executing your goals and help you to systematically address all your biases. Book a free demo with our team to learn more about how OKR software can help in focused decision making and optimize your organization’s performance!