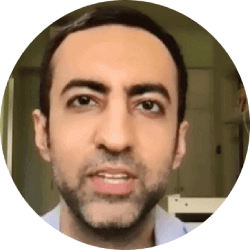 “Working with the team is one of the main reasons I signed on with Profit… the amount of effort that they put in, number one, and number two their responsiveness, I was really very happy with.”

Open Government Products, run by GovTech, the Government Technology Agency of Singapore, is a start-up that is trying to reimagine what government can look like if they worked on public sector problems the way a modern tech company would. In this start-up, the team has the freedom to imagine how they can get the best out of their people.

No one does this more so than the Head of People and Culture, Rahul Daswani. Rahul is an alumnus of the Harvard Kennedy School of Government, and has more than a decade of experience working at the intersection of technology and government.

He shared that he was aiming to close a few gaps in traditional performance management systems. Many systems use a relative model which relies on comparing employees and putting them in different categories.This means that a limited number of people can meet or exceed expectations– making this a win-lose model. In the same way the bell curve relies on some individuals to be on the far end of the graph, this model relied on some employees getting poor marks.

Rahul knew that instead of a relative model, he wanted an absolute system of performance management– which makes it possible for all individuals to reach optimal performance. He began by building career schemas, and defining what success looks like in each and every role. Additionally, he wanted to get away from the purely quantitative evaluations that managers usually provided and incorporate qualitative feedback. Most importantly, he felt that performance reviews needed to come from multiple sources– in his ideal model, about six or seven individuals would provide a review for one employee.

Changing the philosophy of performance management to promote more collaboration can help provide a more informed review of an employee.

As a start up, Open Government Products used Google Sheets to conduct their performance reviews. Rahul received review evaluations from his team on Google Sheets, anonymized the data, and sent it to managers in order to complete a performance review. This required employees to have trust in him, and also made it difficult to scale this system.

Rahul and the team instead wanted a system that automated much of what Rahul was doing– including collecting the data and formatting it into individual PowerPoints about each employee. They wanted to “professionalize” the system. This wasn’t the most progressive version of performance management that the team felt they could use.

Rahul began by diagnosing the problem in his organization and recognizing what the real pain points were. He conducted an analysis of the traditional model within his organization, asking for feedback about the overall experience, how fair people thought it was, the quality and quantity of feedback individuals were receiving, how well they understand the reasoning behind their manager’s evaluation, and how much effort it was.

Scores from this initial survey weren’t great– Rahul saw there was lots of room for improvement, and wanted the new system to fulfill all of the conditions laid out. Notably, people in the start-up wanted more transparency and consistency in terms of the evaluations they received.

With the new system, scores from all questions have increased by 15-20%– except for the “effort” category. Rahul admitted that the new model “takes time, but ultimately that results in a better outcome for everybody. So it’s worth that additional effort so that everybody gets a better outcome for their own performance management and they develop much faster and much better as a consequence of having this more thorough model.”

Peer reviewers found freedom in this fact. Meanwhile managers got more data about how an employee is perceived by others, who they are able to communicate well with, and what changes they needed to see in the employee in order for them to work better with other employees.

Meanwhile, executives had a bird’s eye view of performance reviews with the opportunity to determine which individuals should rate one another. The overview of all reviews and reviewers enabled executives to see whether someone was taking on too many reviews. Additionally, they could see review results quickly, identify outliers, and intervene much quicker if there was a problem within a department.

With his ideal performance model in mind, Rahul wanted to find a vendor or product that would be able to help him execute this model with technology. First, he tried going with established and familiar performance management software brands, such as Performia.

However, products like these did not have the flexibility needed to execute his vision. Rahul shared that, “They had quite a clear idea of where their product was headed. For them, affinity-based or confidence-based… performance management was not a feature that they were particularly interested in pursuing…. they were reluctant to then make this feature a priority.”

While these companies acknowledged the usefulness of Rahul’s model, clients weren’t asking for it. Instead, Rahul sought out a provider that would be able to work with him. This is what brought him to Profit.co. Rahul shared that Profit.co “was starting to think about building up their performance module more thoroughly and thinking about how to do it in a way that can provide some of the best options for organizations.”

Rahul was able to sit down with members of the Profit.co team. He felt that the team understood not only how the performance process worked and how it could be operationalized, but also some of the fundamental principles of how his company wanted to work. With an understanding of how Open Government Products operated and Profit.co’s experience with other organizations, they developed a product that is incredibly customizable.

For example, Rahul’s organization wanted to use a confidence score scale that was weighted 1, 2, 4, or 8, with the premise that individuals who work closely with the reviewed employee should provide reviews that hold more weight than individuals who do not work closely with the reviewed employee. Rahul found that Profit.co was able to meet this requirement with customizable affinity levels, and loved the flexibility of the product in regard to colors for charts, weightages, and different levels– all of this, in Rahul’s opinion, made for a really great product. This way, users can customize what makes sense for their organization.

What were your expectations for Profit.co?

Rahul had a few essential expectations for the product. First, as the Head of People & Culture, he wanted an overview of what was happening within the company at any time. This wasn’t possible with Google Sheets. He wanted an up-to-the-minute bird’s eye view of performance review progress and results, especially so that he could see who had submitted their reviews. The lack of this feature in a spreadsheet was one of his major pain points.

Additionally, with Rahul’s previous system, he was in charge of manually copying over reviews received in Google Sheets to anonymized PowerPoint presentations on the reviewed employee. This system was not scalable, and he wanted to be able to automatically compile information into a report.

And finally, Rahul wanted to develop a way for the product to automatically pick out reviewers for each individual. Currently, he’s working on an algorithm that will adequately select people based on the breadth and depth needed for each individual to have a comprehensive review.

Has Profit.co met your expectations?

Rahul shared that Profit.co provided a visual overview of the performance review process that met his requirements. On the dashboard, he could add individuals as reviewers as he saw fit, and could ensure that people weren’t overloaded with too many reviews. The first pain point was resolved.

The second pain point, which revolved around compiling a report after a performance review, was also addressed. Rahul was able to continuously work with the Profit.co team to address his needs for this performance model. Rahul shared that “Overall it was quite smooth, people were quite happy, it was much more professional– that was some of the feedback we got from our team.”

Next, we wanted to know how Rahul’s experience working with Profit.co was. He shared that “Working with the team is one of the main reasons I signed on with Profit… the amount of effort that they put in, number one, and number two their responsiveness, I was really very happy with.”

He was satisfied with the service as well as an urgency with which they addressed any issues he faced– if he contacted them with an urgent issue, he felt that he could see the urgency reflected in their timely responses and frequent updates– sometimes multiple updates in the same day. “I was very happy with the care that was given to me by the team, and that made me have more confidence in rolling something out.”

Open Government Products was using Profit.co during the onset of the COVID-19 pandemic. Rahul shared that the team was able to figure out the hybrid model quickly. As a tech company, everyone was able to quickly grasp new platforms and new ways of doing things. Primarily, everyone at the start-up is still working from home, and it did not have any major impacts on rolling out the new performance model.

Finally, we asked Rahul to share his advice for other companies who were rolling out a new performance management model. He shared that there were three essential steps.

First, companies should diagnose their problem. They should figure out if there is something wrong with their current model, and identify the exact issue they’re facing. Is the model fair? Is it a good experience for users? Companies should strive to understand if their performance model is good or not, and see how their people feel about the model. After identifying the specific issue with your model, you can focus on remedying it, rather than reinventing your entire model.

Second, companies must determine what they want from their employees in their specific roles. If an organization is to succeed, the organization needs to know what that success looks like. Companies should outline what it means to exceed expectations in a given role. This provides clarity for people to strive towards and offers them more direction for growth and development within an organization.

And finally, companies should find ways to get more data– both quantitative and qualitative in nature. Rahul believes that affinity-based data provides the best insight to employees, as people feel they are able to be honest and provide details due to the fact that their responses will be proportionately weighted according to their affinity-level or familiarity with the reviewed employee.

Profit.co’s performance management module provides you with a customizable way to evaluate employees, set expectations, and direct employee development to the benefit of your business. To learn more about this module in the Profit.co software, don’t forget to visit our product page, or book a free demo with us today!