A ratchet is any mechanism that allows progressive movement in one direction. Named after the ratcheting form of a winch, the ratchet effect applies to any process where progress is difficult to reverse.

What Is the Ratchet Effect?

What Is the Ratchet Effect in business?

When a business organization scales up production then a set of underlying processes like employing extra labor, sourcing material, logistics, etc will be recalibrated to accommodate the change. The ratchet effect is most often applied to a situation where an employee makes a minor improvement in their work performance. The employees then, within a short period, receive more targets and recognition based on their eventual output. 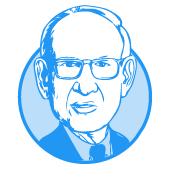 Whenever you see a successful business, someone once made a courageous decision.

The Ratchet Effect can lead to an escalation of production, price, or wage that tends to self-perpetuate and resist fallback. Human cultural transmission is characterized by the ‘ratchet effect’, in which modifications and improvements stay in the population until further changes ratchet things up again.

Ratchet effect can bring back focus on goal setting

If employees set underwhelming targets consistently and achieve them by scaling down their performance, it would indicate that the targets are not ambitious enough. This would bring back focus on the way goals are set in the organization and motivate managers to look for better goal-setting methods and tools to build a performance culture. This can end up enhancing productivity across the organization, in addition to addressing the stagnation of performance in silos.

Introducing a goal-setting framework such as Objectives and Key Results can inculcate the habit of ‘aiming higher in relation to oneself and one’s peers, thus pushing the performance envelope one notch higher every time, at every level, resulting in a holistic growth of the organization. It can create an environment where holding back performance can leave one behind, compared to peers, exposing any potential for artificially created performance stagnation in the future.

While making big investments and scaling operations that could not be rolled back in the event of not meeting expectations, ratchet effect can help improve the bigger picture in the long run. Sometimes, success may come after a delay due to various factors; keeping those investments alive at those times is vital to capitalize on the rekindled demand and achieve desired success.

When you bet big, and even if it does not pan out as expected, you are still committed to making that investment work. This can lead you to explore alternative strategies, come up with new innovations and find a way to get ROI at any cost. Instead of halting operations, dismantling facilities, downsizing the workforce, and scaling down operations, you will eventually be repurposing those investments, facilities and workforce to explore related avenues of growth. This will make your organization agile, adaptable and flexible in the long run. It can also motivate your employees to follow the inspiring leadership you show in turning around investments into profits and eliminate the defeatist mindset from your organization’s culture. As a result, you will become stronger and more resilient as an organization.

For example, if an automobile company rolls out a new model that fails to appeal to the customers, the company can use the assembly line to manufacture a more successful product to reduce its waiting period, while keeping the workforce and equipment fully functional up until they can be used to build a newer model or until the reasons for the failure of the product are addressed and a facelift model is introduced.

How to Set the Right Goals to Stop the Ratchet Effect

How Does the Ratchet Effect Impact Employee Performance

The ratchet effect principle applies in various planning or regulatory scenarios. For example,

A ratchet effect backfires can occur when workers whose compensation relies on performance, limit their output. This action may create short-term increases in efficiency and performance. But it can have negative long-term consequences for workers. It is bad for workers to withhold effort, but it is also rational for them to withhold performance if they receive wages according to effort.

Let’s look at some examples.

It is well-known that compensation of whatever nature should bear an upward trend. For an individual who received a $1,000 reward during last year’s appraisal, it would be natural for him to expect something like a $1,200 or $1,500 hike this time. However, they will feel disappointed if they end up with $700.

When a company implements a new strategy to keep up with the rising demand for its products/services, it often comes with noticeable changes. Some are:

These changes could result from reactive strategies – something that causes the ratchet effect. When such changes fall short of expectations, companies hardly consider scaling back to their previous level.

What Are the Ways in Which You Can Reverse the Ratchet Effect?

1. Managers Must Learn to Tweak Targets

Managers have one challenge – achieving the right targets is critical, but it’s not easy to determine the right target either. Since there is a possible catch-22 scenario, the aim is to avoid setting your goals too low or too high. The idea is to ensure you set attainable goals, not impossible ones.

Managers should create a good rapport with their juniors. This way, engaging them when setting or reviewing attainable goals is easier. A positive change in deliveries could have been a hunch or a window of opportunity that made it possible to achieve an impressive one-off output.

3. Managers Must Be Problem Solvers

Managers will likely review targets upward whenever there is an indication of upward progress. Without a sound basis, this could spell disaster for the company. Employees need assurance that managers cannot implement such a move hurriedly. It is near impossible without trust or a formal agreement. Managers can use employee rewards and recognition program examples to motivate employees while building trust.

Still, if managers agree to keep standard targets for the foreseeable future, the company may experience stunted growth. Without effectively increasing production levels as the business grows, the organization will end up with underworked employees who can surpass their full potential but choose not to, effectively setting the company up for disaster. 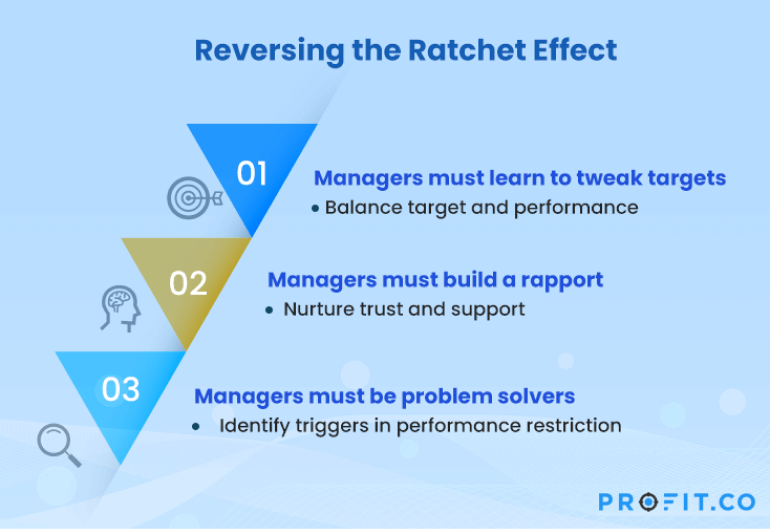 The ratchet effect is seen in many areas of the economy. It’s possible to reverse the ratchet effect, but you can do it only if you recognize it in the first place. Managers must learn to identify and address the triggers.

Book a free demo with our team to learn more about how OKR software can help you set the right goals to reverse the ratchet effect.