A project is a complex undertaking with so many aspects and angles to it coming together at the right time with the participation of so many individuals and teams. Project management involves carefully managing various parameters of the project and constantly verifying its status and progress at different stages. This requires tools that handle data and visualize the progress of the project through various stages, identify issues and find important details hidden in the data. The S-curve is one such project management tool.

In this blog you will learn

What is S-curve in project management?

An S-curve is a graphical representation or an illustration of the cumulative data related to a project. It uses relevant data from the project, such as cash flow, man-hours, etc., and traces the progress of these aspects of the project against time. This helps you to:

Mankind invented a system to cope with the fact that we are so intrinsically lousy at manipulating numbers. It’s called the graph.

Why is it called the S-curve?

It is called an S-curve because of the S-like shape that it typically makes in the graph while tracking the progress of your project. However, an S-curve does not necessarily have to be in the shape of an ’S’ all the time. It can differ, depending on the nature and the type of the project.

Why does an S-curve assume that shape?

S-curve assumes that shape because of how a project usually develops and progresses.

The project usually has limited activity and progress in the beginning. This is because, in the project’s initial phase, you would still be planning, conducting a market study, or evaluating the various aspects of the project, such as budget, human resources, etc. You would be onboarding members, building the project team with the right people, defining their roles, and setting goals for the project. You might still be having problems or minor glitches that typically show up during the initial phases of project execution. As a result of all these factors, there would not be any significant activity in project execution. Consequently, the graph would remain relatively flat during that phase, forming the lower part of the S-curve, which is known as the lower asymptote.

But as everything becomes clear and the project takes off and gains momentum. As a result, the graph representing the project’s progress also rises exponentially. This rise forms the middle part of the S shape in the graph. This is where the highest amount of growth is recorded. The point of maximum progress is called the inflection point. This point represents the time when the project team members work really hard, and the most budget and resources are being spent.

Beyond this point in the curve, the graph flattens out, completing the S shape with a flat top portion named the ‘upper asymptote’. The upper asymptote marks the change in the progress of the project – a point where the project attains maturity. This maturity is attained when work related to the project gets completed and when you start wrapping up the project, evaluating its impact, writing the report, and getting approval from key decision-makers. The S -Curve is a helpful tool in any project management style including kanban or waterfall project management. 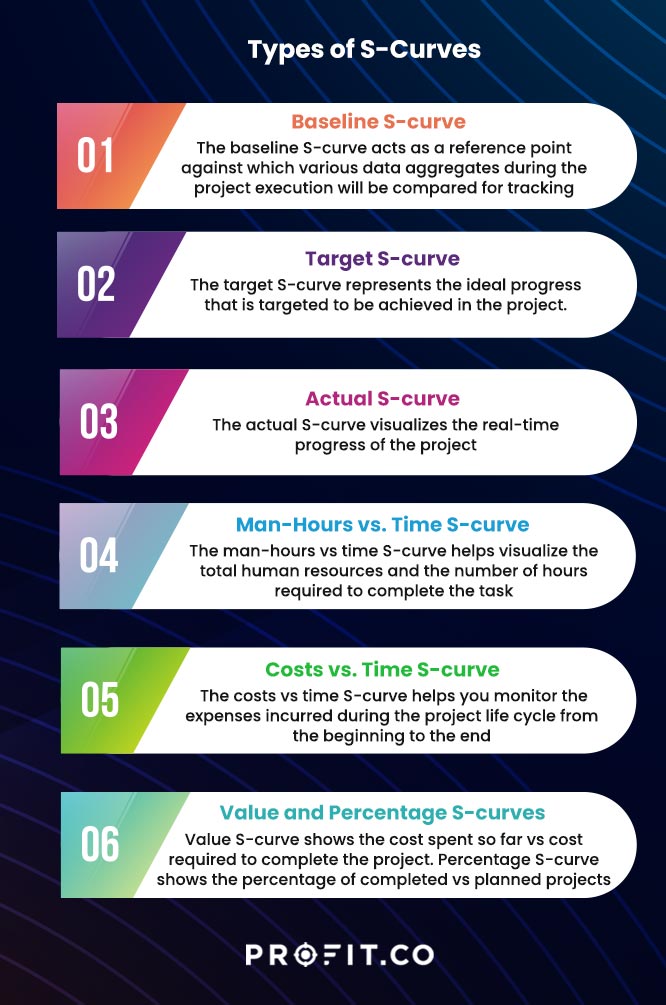 Following are the different types of S-curves in business.

5 insights you can get from an S Curve.

Data , graphs and charts play a vital role in project management. It serves as a valuable source to access, compare and decide. The role of the S-curve to take critical decisions is not lost on leaders. To learn more about agile OKR software and how it can be an effective tool in project management you can get started on Profit.co completely free today!