Every organization follows a performance evaluation process. It’s a staple of the modern workplace and, depending on their culture, each organization follows a process that suits them the best. The idea behind performance evaluations is to measure the performance of the employee justly, and ensure fairness in promotion and compensation decisions. However, as fair as the evaluation form may seem, it often allows for biases to creep in. One of the biases that people are more likely to base their decisions upon are gender biases.

Quantitative performance ratings make the task of comparing employees easier for managers. However, they are far from objective. Research has shown that people give men higher performance ratings than women, even when their qualifications and behaviors are identical.

Bias builds up. If the performance reviews for women are not as good as their male counterparts, they’re less likely to get raises and promotions, and it becomes more and more difficult for women to break the glass ceiling. Fewer and fewer women make it to senior positions, especially in male-dominated industries. Which then reinforces the notion that men are more capable and more worthy of senior positions, thus reinforcing the stereotype that women are not as capable as men. This, then, becomes a vicious cycle.

Women’s representation in S&P 500 companies takes the form of a pyramid, with their numbers starting out broad at 44.7% of overall employees, sharply declining at higher levels of management (21.2% of board seats) and diminishing to just 4.8% of CEOs. 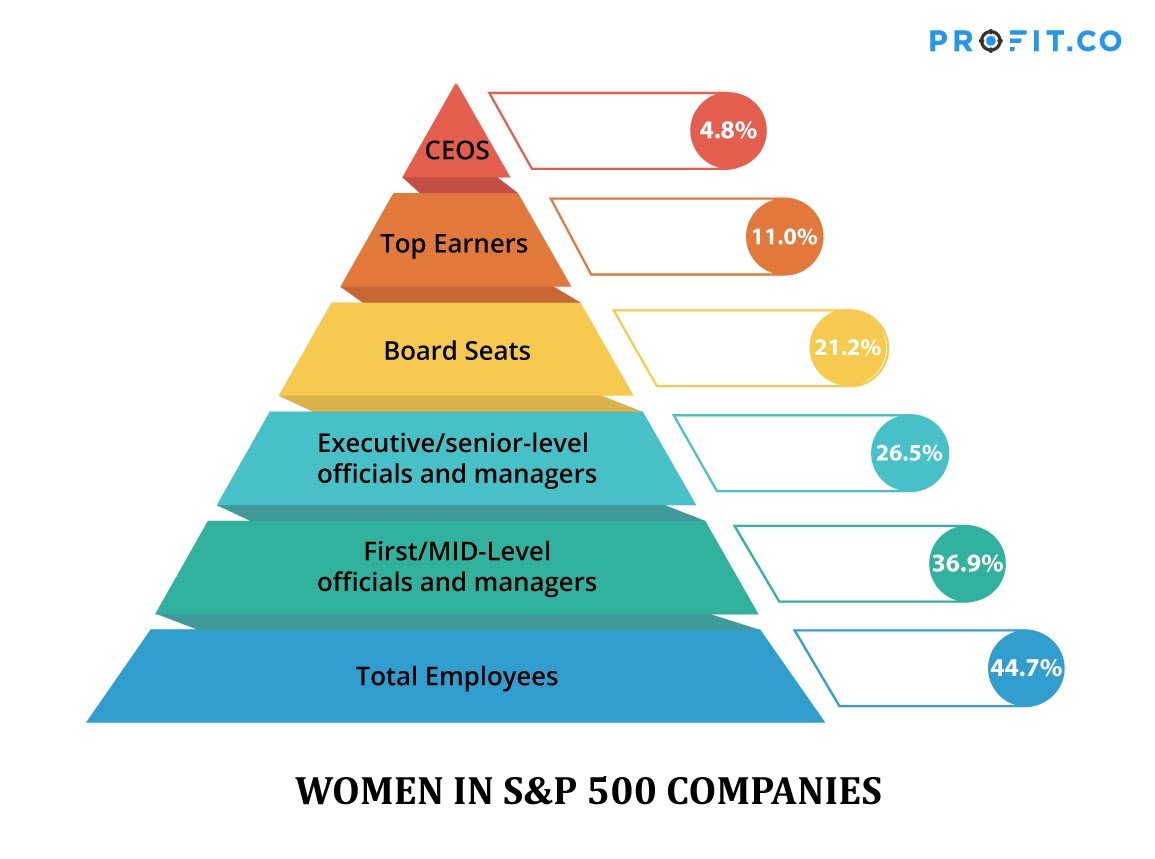 Between men’s and women’s written performance reviews, women are more likely to get a vague feedback that did not offer specific details of how well their performance was and what they could do to be better at what they do, without an explanation about how to overcome the issue. “Susan is challenging to work with.”

Men, on the other hand, were more likely to receive longer reviews that focused on their technical skills. “Nick could work on his technical expertise.”

Nick’s feedback is based on his skill set, which can be improved with the right guidance and training. On the other hand, Susan’s feedback is based on her work style. It is vague; it does not offer specific details of how well her performance was and what she could do to be better at what she does. A comment like that raises doubts about her personality, and also seems like something that can’t be “fixed.” And therefore, Nick gets the promotion and Susan doesn’t. This situation is all too common and a reason for the gender pay gap and unequal growth opportunities in workplaces. 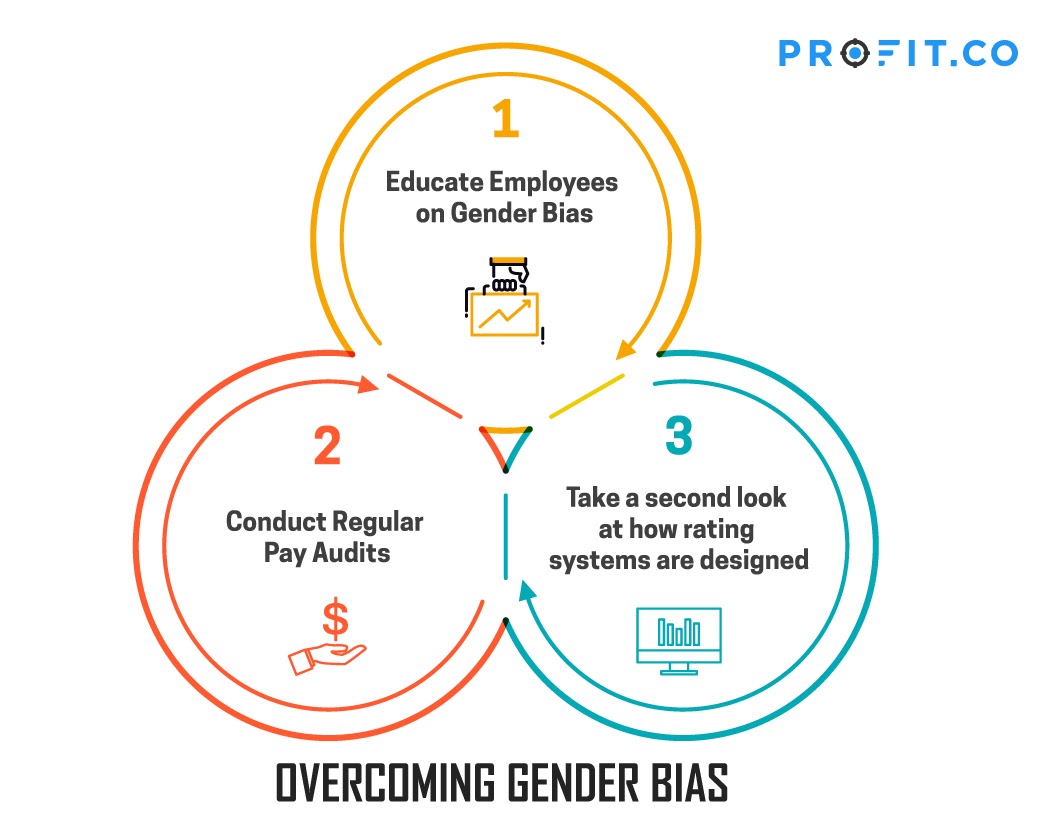 The first step is to educate employees on gender bias. Some might not be aware that there’s an issue, because it’s so commonplace. If employees aren’t aware or don’t think it’s an issue, or don’t know of any solutions to minimize gender bias, they will not make any changes. They need to be made aware what gender bias looks like, whether obvious or subtle and know how to avoid it at the workplace. Illustrate the point through exercises to drive home the message. When it’s clearly defined and they are educated, they will be better prepared to identify bias when they encounter it, or learn how to change their own behavior.

Here are a few suggestions:

Gender pay gap exists in many countries and it is significant. What this means is that women are paid less than men based on the same amount of work. This is a clear indication of gender bias: women working hard and doing a great job, yet taking home less money than men at the workplace.

And therefore, the need to conduct regular pay audits at the workplace.

How is it done?

List all the employees and their pays, and check if there’s a gap between the average pay of men and women. Frequently review salaries for parity between genders and races.

Compare employees in similar roles with similar levels of performance across male and female employees and check if there’s a gap in pay. If there is, it definitely needs to be fixed.

Evaluating an organization’s compensation trend can indicate patterns, inconsistencies or obvious bias that might exist. By acknowledging it, the organization can take steps to make its compensation system more progressive and reflective of equal pay for equal work.

3. Take a second look at how rating systems are designed 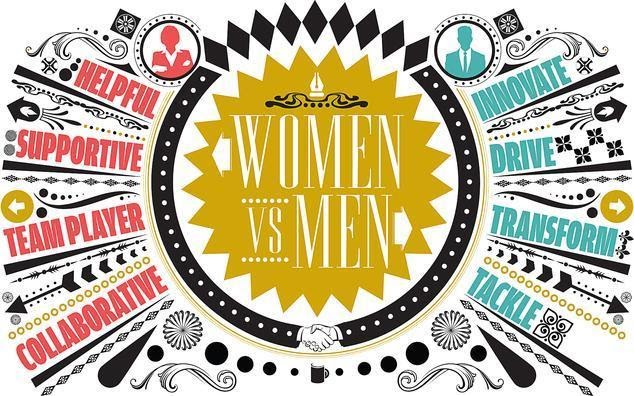 In a world that’s obsessed with data and metrics, we often think that our tools for measuring and evaluating performance are very just. Unfortunately, this is not always the case. And the situation is such without us even realizing it. Numeric performance ratings are everywhere, although they are not neutral instruments.

When, say, a 10-point rating scale is used to evaluate performance, men receive significantly higher ratings than women in male-dominated fields – Male employees are usually assigned the 10s. But such is not the case when assigning ratings to female employees. They are assigned 8s or 9s. 10s are very rare.

The words assigned to the male employee’s performance were indicative of ‘brilliant, extraordinary performance’. Raters associated that kind of performance to a male employee rather than the female employee. This is reflective of the deep-seated gender stereotyping of males with perfection, and associating their performance with words like ‘genius’, ‘star’, whereas women’s performance is scrutinized for errors and skepticism. A 10/10 is a very high and elusive bar for women.

But then a tweak in the rating system makes all the difference. How does it do that?

When the rating scale is switched to a 6-point scale from a 10-point scale, it entirely eliminates the gender bias. A slight tweak in the rating system brings about significant changes.

The results indicate that this small tweak in how rating systems are designed could disrupt gender bias.

The 6-point scale, unlike the 10 point scale, did not come with strong performance expectations. To receive a 6/6, the employees don’t need to be seen as exceptional, extraordinary or brilliant. To be perceived as very good sufficed. The 6/6 rating didn’t bring out the stereotypical cultural associations of brilliance with men as the 10/10 rating did. The 6-point rating scale was able to contain the expression of bias, and then, the gender bias disappeared. As a result, both men and women employees were rated at par when the rating system changed.

It’s difficult to overcome our own personal biases, however much we might deny them. But once we acknowledge that biases exist in our evaluation systems, we can change those systems. It is essential to guard against gender bias in performance reviews and managerial feedback, to ensure women can move up the ladder just as effectively as men within the organization.

Profit.co supports two methods of performance review– standard reviews and affinity-based reviews. Standard reviews allow HR administrators to customize reviews with open-ended questions so that employees have ample opportunity to describe their experience and perspective on their performance during the review period. Managers can review these questions and get a better idea of an employee’s experience and performance. Similarly, managers can offer comments on employee performance so they have ample room to explain their perception of the employee and specify examples of both positive behavior, and behaviors that need to be improved.

Affinity-based performance review asks reviewed employees, managers, and any selected peer reviews to rate an employee’s competencies skills or attributes necessary for professional success. This 360-degree review method can offer multiple perspectives on employees, opening up the manager’s eyes to different opinions and perhaps helping to eliminate bias. Additionally, rating scales used to evaluate competencies can be set at any interval, and can easily use the six-point tactic described in this article.

HR can play an important role in analyzing performance reviews for signs of bias, and in training supervisors to combat their own biases as well.

When an organization adopts these methods, its employees will begin to respond to these methods, and there will be changes in behavior and attitudes, slowly, but surely. This will benefit the overall performance of the team and the company as a whole.