The sunk cost fallacy is our habit of continuing a project we invested in, even when the downsides outweigh the benefits. We can invest time, effort, or finances.

Let’s say you purchased a ticket to a movie premier four weeks ago for $500. On the premiere night, you discover it’s pouring outside, and you’re feeling unwell. That means traffic will be crazy due to rain, and your presence in the theater will not do your health any good.

Let’s be honest, aren’t you still likely to go to the theater, despite knowing that the downsides outweigh the benefits?

The sunk cost fallacy definition is this exact tendency. You are more likely to continue with something if you commit to it effort-wise, time-wise, and financially. You choose to ignore evidence that pursuing the course is no longer ideal, like with the bad weather or sickness in the above example.

When you give in to the sunk cost fallacy, you tend to make unreasonable decisions that don’t favor your best interests. You keep digging a deeper hole, and sometimes you are aware yet can’t stop yourself.

In this article, we’ll discuss sunk cost fallacy, how to recognize it, and how to avoid it altogether.

What is Sunk Cost Fallacy?

In business, a sunk cost is an impossible investment to recover. If your business incurs a cost and there’s no possibility of recovering it, that cost is “sunk.”

For instance, you can assess your business and note that creating a new trendy marketing campaign or buying expensive software may be beneficial.

When making that investment decision, you have optimistic predictions and hopes for the future. However, even promising investments can fail, so what would you do if you get disappointing results? You can choose to cut your losses or continue with the course in hopes of better outcomes and losing more money, time, and effort.

In such a case, the best move for the business would be to accept the loss and abandon the investment. Continuing with investment is an example of giving in to sunk cost fallacy.

While dealing with sunk cost fallacy and decision making business leaders must not fall prey to Cognitive Biases that plague decisions. This can lead to decision fatigue.

OKRs can help avoid Decision Fatigue. At the center of OKRs are focus and alignment. Once you set your objectives and align them with measurable key results to track your goals then let your OKRs guide you through the quarter. Book a free demo with our team to learn more about how OKR software can optimize your organization’s performance by helping with decision-making.

The sunk cost fallacy primarily happens because our emotions sometimes prevent us from making rational decisions.

Deserting a venture after committing and pouring resources can cause feelings of loss and guilt. You may keep the course to avoid such feelings, even when it doesn’t support your best interests.

There are different types of sunk cost fallacy, including 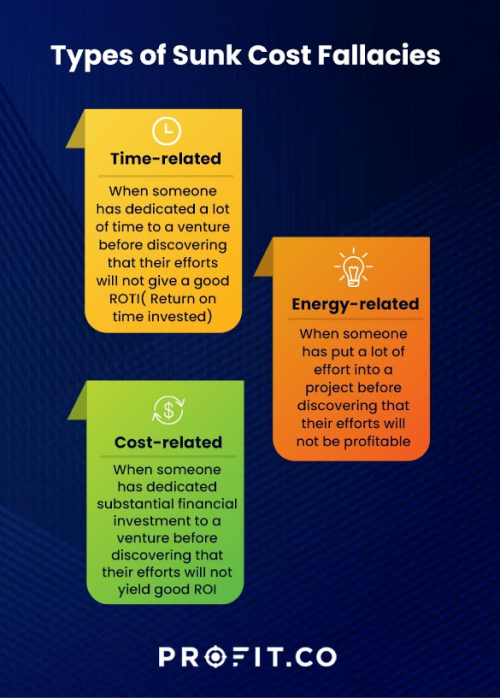 As with the above examples, the sunk cost fallacy affects multiple aspects of your life. It often causes you to make big decisions with long-lasting effects. You make irrational decisions that have poor outcomes. You focus on past investments rather than current and future benefits and costs. You repeatedly commit to decisions that are not beneficial to your best interests.

The more you invest in this vicious cycle, the more you gain commitment and pour in more resources. You can only break the chain if you recognize it and know how to get back on track.

How Does Sunk Cost Fallacy Affect Decision-making in Organizations?

The Concorde fallacy is a famous example of the sunk cost fallacy effect on large-scale decisions.

In 1956, Supersonic Transport Aircraft decided to build the Concorde, a supersonic airplane. British and French governments and engine manufacturers estimated the project would cost about 100 million dollars.

Before the project ended, they realized the profits from the plane once it started operating would not offset the project’s increasing costs.

Rather than abandoning the project, the governments and manufacturers carried on since they dedicated too much time and finances. They wasted millions of dollars, yet the Concorde did not even last thirty years.

If such high-level executives fell for the sunk cost fallacy, it’s easy to see how we can all experience the adverse effects.

How to Identify Sunk Cost Fallacy; Measuring Your Susceptibility to It

Some common signs can help you recognize sunk cost fallacies, such as:

How to Avoid Sunk Cost Fallacy

Investing your energy, time, or money in a venture doesn’t mean you can never abandon the sinking ship. Recognizing and acknowledging the best time to cut your losses is your best line of defense. Some decisions can cause a domino or a ripple effect that can cause lasting harm. So it is indispensable to understand and make a serious effort to overcome it. So, it is crucial for organizations to carefully consider this and increase self-awareness to defy sunk cost fallacy. You can get started on Profit.co completely free today to learn how your team can learn about OKR software that can help with decision-making and optimize your organization’s performance!