One of the biggest issues that modern performance management programs have is that they often only evaluates employee performance through a single lens. Since the concept of the annual review became popular in the corporate world in the 1970s, managers have typically based their employee evaluation comments on their own perspective of that individual and nothing else.

As you may expect, this has the potential to cause significant problems in the workplace, not the least of which includes the potential for unconscious biases and discrimination. This can result in unfair evaluations, a loss of team morale, and lower employee retention in an organization.

Unlike a traditional annual performance appraisal, a 360-degree review seeks to correct this by conducting employer reviews around the perspectives of multiple people.

What is 360 Degree Feedback?

Why is 360 Degree Feedback so Important?

360-degree feedback has become a popular tool to measure an employee’s performance based on their working relationships within the company, as well as how they interact with third-party individuals. Instead of employee performance being based solely on how a manager perceives an employee, this method of review gives them a more rounded view of an individual.

If you’re worried that 360-degree feedback will add even more hours onto performance management requirements, then you’ll be thankful to note that it doesn’t take much more time to complete than a traditional review. The 360-degree feedback system works in three steps: 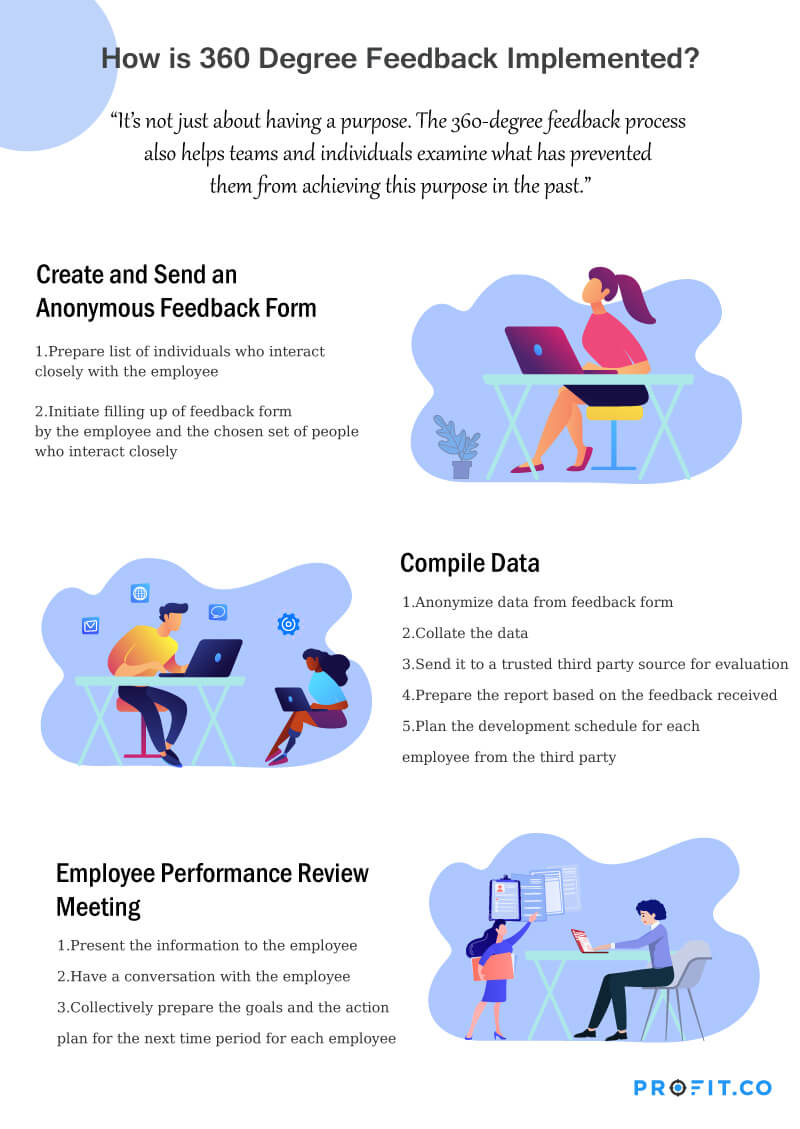 Managers will create a list of 6-10 individuals who have regular contact with an employee, and these respondents are grouped depending on their relationship to that employee. At this stage, they may also consider sending these forms to third parties like customers, clients, or suppliers.

Using a standardized feedback form based on the employee’s job role, they send this form to these individuals, asking them competency-based questions about the employee’s behavior and skills. These questions will usually be answered on a scale of 1-5, to allow for easy data collection.

The employee who’s being reviewed also fills out the same form.

The responses are anonymized and collated as an average by, typically, a trusted third-party source. Once a manager receives this data back, they then create a report and development plan.

As with traditional employee reviews, the manager then presents this information to the employee and talks through the form responses with them. Together, they come up with a series of goals based on this data for the next review period.

Pros and Cons of 360 Degree Feedback 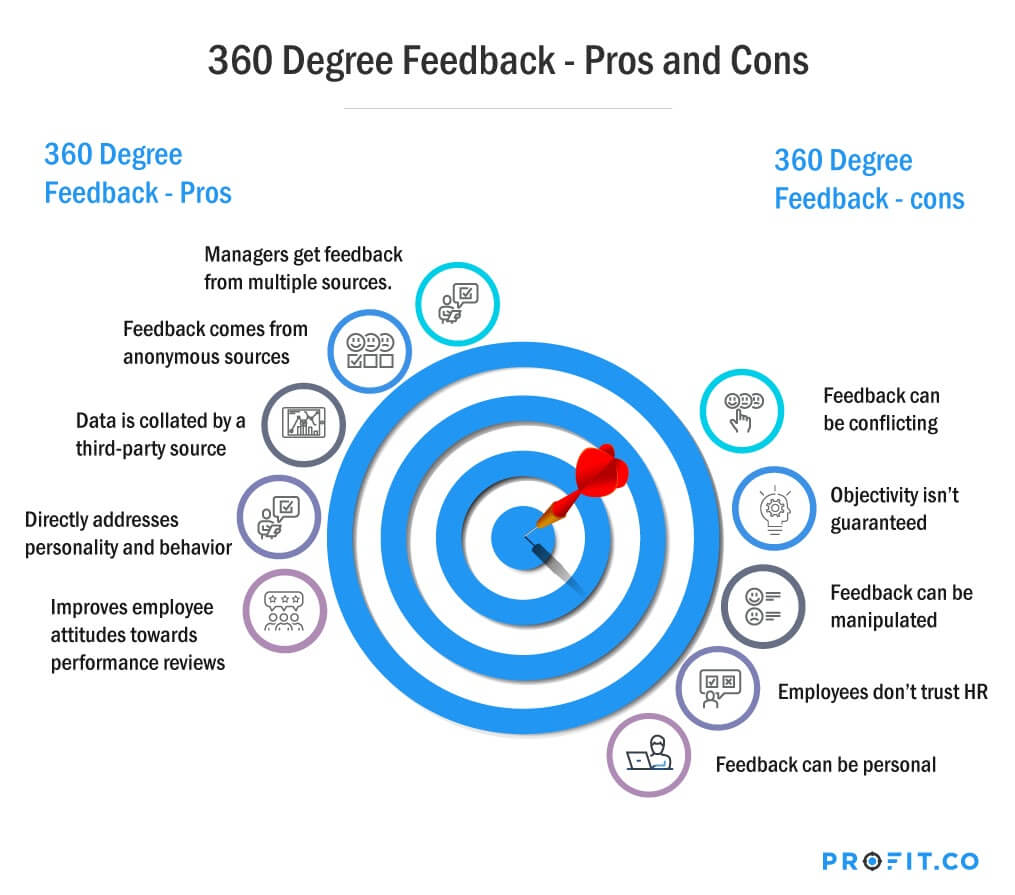 While the questions and prompts that managers use in feedback forms usually – and should – depend on an employee’s specific job role, you should also make sure that they take into account the purpose of 360-degree feedback in your organization.

As with other forms of performance reviews, managers should always take into account whether the feedback they’re gathering is performance-focused, personality-focused, or both. All of these options can be run by 360-degree feedback processes, but the organization’s focus will greatly influence the choice of questions.

With that being said, here are some 360-degree feedback examples: 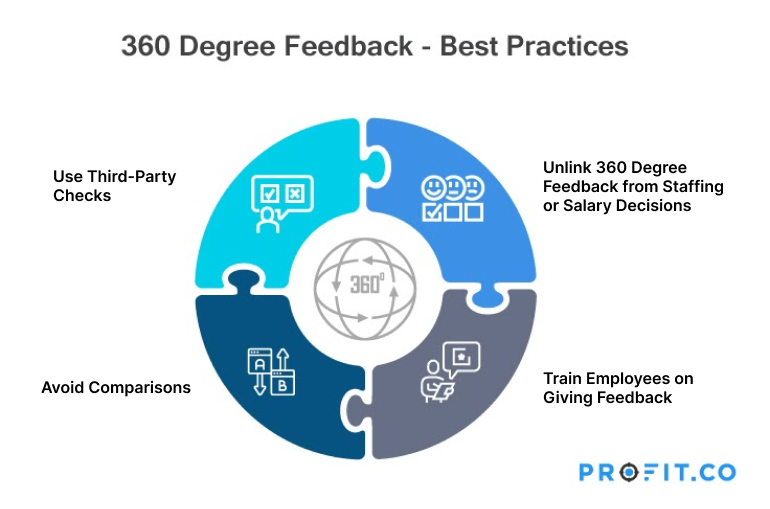 As discussed earlier, 360-degree feedback has the potential for bias to creep into the process. That’s not to say that it’s worse than other forms of performance review feedback cycles, but simply that there are best practices that managers should be aware of when going through this process.

Although data is anonymized, managers will have chosen who they’re sending feedback forms to at the start of the process. That means that when data returns, there is the temptation for managers to try to figure out where free-form feedback has come from. Not only that but in small organizations, it can make it easier for employees to figure out who’s been asked for feedback.

Having a third-party individual or group involved to conduct checks minimizes the risk of bias, both conscious and unconscious, particularly if that third party handles the data collection and collation in place of the manager involved. That way, the manager doesn’t see how each employee has responded, which makes it a fairer process for the employee.

Also, some third-party checkers can help implement a double-blind system, in which a manager passes a list of contacts for each employee, but it’s the third party’s responsibility to contact a certain number of them for feedback. This is the fairest possible scenario, as it means that neither the manager nor employee knows who has said what.

Earlier in the article, you read that when 360-degree feedback is used to make staffing decisions, this makes it more likely that feedback form responses will be manipulated. Whether this is as a result of a smear campaign against a disliked employee, or a group of friends trying to secure pay raises for each other, it reduces the value of this process and means that the wrong people may be rewarded or punished as a result.

Given that one of the main benefits of 360-degree feedback is that it reduces employee anxiety around performance reviews, using these reviews to make staffing or pay decisions can reintroduce anxiety and tension.

360-degree feedback works best when employees value the process, which is why training employees on how to give meaningful feedback can make this style of performance feedback even more valuable to an organization. While ratings of 1-5 are easier to anonymize and take an average, giving trained employees the ability to provide qualitative feedback about an employee often says more than a number.

This makes the process more useful to both the employee and their manager, as it will more accurately show how an employee is seen by others.

As with other forms of employee performance reviews, managers should always avoid comparing employees to their coworkers or others within the company. Not only is this rude and insensitive on the manager’s part, but it also heightens employee anxiety and can either create unhealthy competition or a sense of worthlessness and self-doubt. It may also lead to employees resenting other individuals within the company, and in particular, those that they are compared to.

Both of these outcomes mean that an employee is less likely to make any meaningful performance improvements after the process, which makes the benefits of 360-degree feedback non-existent.

In Profit.co’s software, you can initiate an Affinity-Based Performance Review to get 360-degree feedback.

Affinity-Based Reviews are a model of performance review that invites peers of the reviewee to offer their perspective on the employee’s skills and work quality. This offers a 360-degree view of employee performance. These peer reviews are weighted depending on the affinity level– or, familiarity– that the peer has with the reviewed employee.

Initiators of an affinity-based performance review can:

An Affinity-Based Performance Review begins after an HR administrator initiates a review. Then, the reviewee will complete their self-assessment, and any peer reviewers will be prompted to complete their reviews. Once these have been completed, the manager completes their review. You can see the flowchart of this process here: 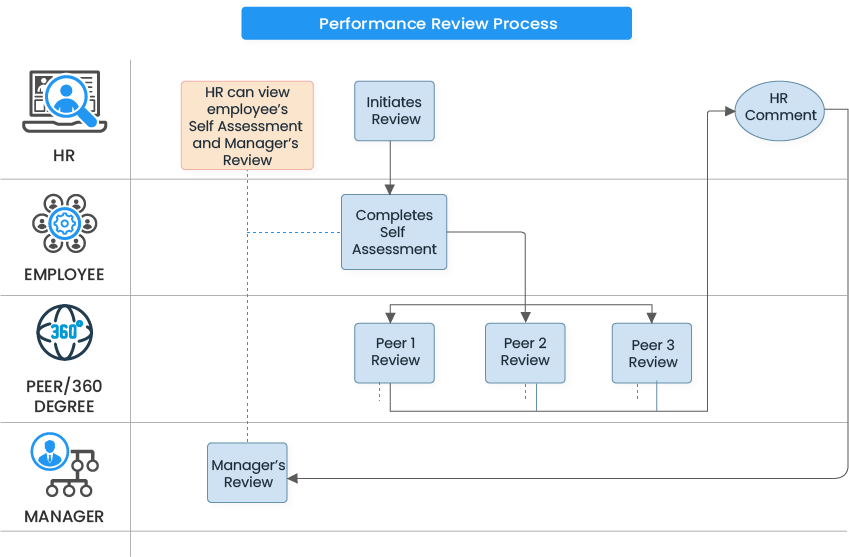 Once the self-assessment, peer reviews, manager review, and HR comment have been completed, an employee will be sorted onto the 9-Box Matrix. This graph contextualizes employee performance in regards to their evaluated potential at the company. It is a performance vs potential assessment matrix to easily identify employees with the potential to move into leadership roles.

Profit.co’s affinity-based performance reviews is a great way to make the most of your 360-degree feedback process. This enables you to get a better understanding of employee performance, and assures employees that they are receiving a fair and accurate performance review.

To learn more about Profit.co’s performance management module, book a free demo with our experts!