What is the best way to evaluate employee performance?

Many companies have tried to find the answer to this question, investing an incredible amount of time, energy, and money into developing state-of-the-art performance management systems.

However, not all companies have these resources. Luckily, they don’t need to they can learn from industry-leading companies right here as we take a closer look at the performance management methods used by Google, Amazon, and Facebook.

What is Performance Appraisal?

Performance appraisal is a process of documenting and evaluating the performance of an employee.

Why is Performance Appraisal Important?

Hiring the wrong person is an extremely costly mistake. That’s why it’s so important to have a solid hiring process in place. To create a strong process, you must first create a hiring feedback loop.

After hiring someone new, you need to consistently review their performance. Otherwise, it makes it difficult to determine if hiring them was the right or wrong decision.

Salaries are the largest expense for most businesses out there. But are you getting your money’s worth?

In order to answer that question, you need to know exactly how much value each employee is producing. Without employee reviews, it’s difficult to quantify an employee’s contributions to the company and overall work output.

Replacing employees is a costly endeavor. To avoid having to fill vacant positions, you’ll want to ensure that your employees are satisfied in their role at your company. Companies that offer career development opportunities for employees have a better chance of retaining employees that would otherwise leave for a promotion at another organization.

Performance reviews can help you determine who deserves a promotion based on a variety of factors such as output, skills, behavior, and potential.

It’s also worth noting that traditionally, performance reviews were only conducted once a year, but now they have become much more frequent, with some companies going as far as doing mini-reviews every week.

Google uses Objectives and Key Results goal setting and management system which is better known by the acronym OKR, a system developed by Andy Grove at Intel and introduced to Google by John Doerr.

Within this system, the term “OKR” refers to a goal that is comprised of two elements:

All employees at Google have their own OKRs and everyone’s OKRs are public within the company (this applies even to Larry Page and Sergey Brin).

Here’s a real Google OKR example that Rick Klau shared in his talk on the topic: 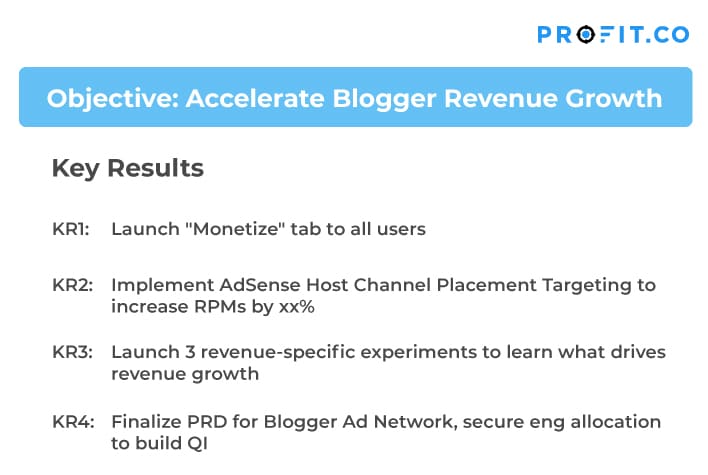 In the same talk, Rick Klau shared that at the beginning of every quarter, Jonathan Rosenberg would send out a public shaming email similar to this one: 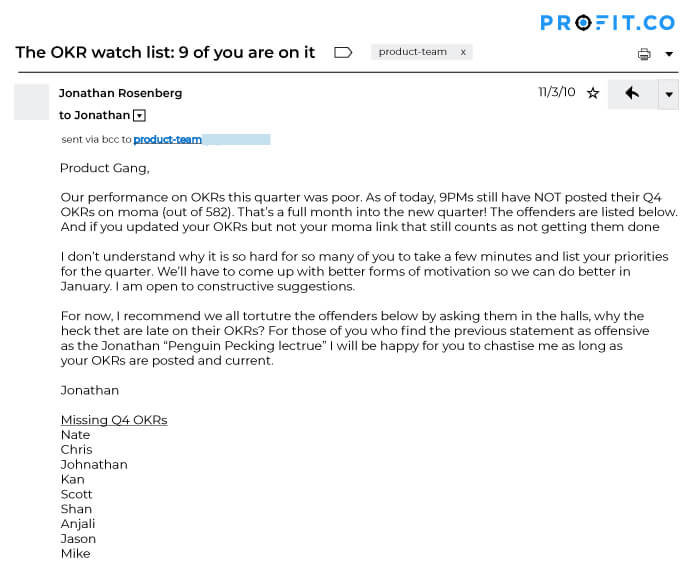 “As an individual, I never wanted to be on that list. I never wanted the person responsible for my team to identify me as holding the rest of the group back. Pretty powerful. And simple,” explained Rick Klau in his talk.

Here are the two main things that managers take into account when evaluating someone’s performance:

The main idea is that feedback is collected from the employee’s peers, giving the manager a 360-degree view of the situation.

Once the manager has the 360-degree feedback data, they draft a rating for the employee.

This helps counteract any biases that an individual manager may have towards a particular employee.

Moreover, it helps the manager withstand social pressure from their team to inflate the ratings.

Once the review is done, each employee has two conversations with their manager:

Google makes a distinction between employee evaluation and employee development.

Here’s how Prasad Setty, a member of Google’s People and Innovation Lab, explains it: 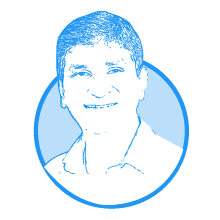 Traditional performance management systems make a big mistake. They combine two things that should be completely separate: performance evaluation and people development. Evaluation is necessary to distribute finite resources, while Development is just as necessary for people to grow and improve.

When you think about it, talking about performance and compensation in the same conversation doesn’t make much sense because the employee will inevitably be completely focused on the latter.

Here is an informative overview of what we know about Amazon’s performance management. 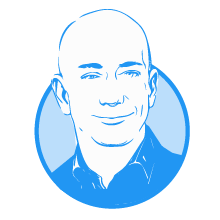 You can work long, hard or smart, but at Amazon.com you can’t choose two out of three.

Jeff Bezos is well-known as a demanding employer, one famous quote of his being “You can work long, hard or smart, but at Amazon.com you can’t choose two out of three.”

Unsurprisingly, this attitude is reflected in the company’s performance management, which leads to a high employee turnover that has been described as “purposeful Darwinism” by a former Amazon’s human resources director.

The company uses software called Anytime Feedback Tool that allows employees to send feedback about their colleagues to their managers.

The manager knows who sent the message, but the subject of praise or criticism typically does not.

Some Amazon employees claimed that this leads to scheming where a few people agree to bury someone in negative feedback or lavishly praise each other.

However, the Amazon spokesman Craig Berman said that it was just another way to provide feedback, like sending an email or speaking to the manager directly.

Once a year Amazon conducts an organization-level review where managers debate the ratings of their subordinates and decide who needs to be fired.

The review starts with the lowest-level employees, then it moves up the corporate hierarchy, with the lower-level managers continually leaving the room until only the top management is left.

Amazon employs a performance appraisal method called stack ranking (colloquially known as “rank-and-yank”) where employees are ranked and the worst-performing ones are fired.

This means that managers have to be prepared to defend the team members that they don’t want to lose.

Alternatively, managers sometimes pick a “sacrificial lamb” that they intentionally throw under the bus in order to protect the more valuable team members.

Amazon has something called the Performance Improvement Plan.

It’s a 3-months period during which underperforming employees are expected to improve their performance to the point where it meets the company’s standards.

Employees that fail to do so are fired.

Profit.co’s employee performance management module has a feature for PIP and you can watch the video created here. There is also another feature called, Individual Development Plan (IDP) for the employees who need training to develop themselves, the video for which you can watch here.

Back in 2015, the New York Times published a scathing article titled “Inside Amazon: Wrestling Big Ideas in a Bruising Workplace” that provided an overview of Amazon’s culture.

On the one hand, Amazon keeps raising the bar, which allows it to retain and expand its market dominance in the eCommerce sector.

On the other hand, it’s extremely competitive culture and brutal performance appraisal methods come across as inhumane, which explains why people don’t last long in this company.

Here is an overview of Facebook’s performance management:

The company has biannual performance reviews, but it also encourages continuous real-time feedback through dedicated software.

In the two weeks before the review employees write self-assessment and collect peer reviews from 3-5 colleagues.

Then the managers go through this data and give the employee the “Performance Assessment” rating which is the evaluation of their performance over the previous six months.

This is also when the manager decides whether or not to promote the employee.

Managers meet to grade employees together. It starts with the entire management team and ends with Mark Zuckerberg and Sheryl Sandberg signing off on their vice-presidents’ work.

At that point each employee’s rating is finalized.

Employees are graded according to a scale similar to this one:

This encourages competitiveness but also introduces various issues such as employees focusing on short-term goals and managers having to make up criticism to meet their low-grade quotas.

Some people say that the performance appraisal process was transparent enough to know where they stood and what they needed to work on.

Meanwhile, others talk about a “cult-like” atmosphere where dissent is discouraged and compare peer-reviews to a popularity contest.

That being said, 87% of Facebook employees wanted to keep performance ratings, which seem to indicate that they do provide value.

Managing a large organization is an incredibly complicated task.

There’s no denying that performance appraisal methods used by Google, Amazon, and Facebook have their downsides.

However, there’s also no denying that these performance appraisal methods work, as evidenced by the continuous growth of these three companies.

Don’t hesitate to study how these giant corporations manage performance and then apply what you have learned in your own company.