At times, your radar chart doesn’t indicate you’re progressing as you might have hoped. Instead, it might present unbalanced progress on your OKRs. While this gives you a great idea of which OKRs are lagging behind and signals that you should re-commit to those OKRs, there might be even more information to derive from this scenario.

There are a myriad of potential reasons that you might be facing unbalanced OKRs in your organization. 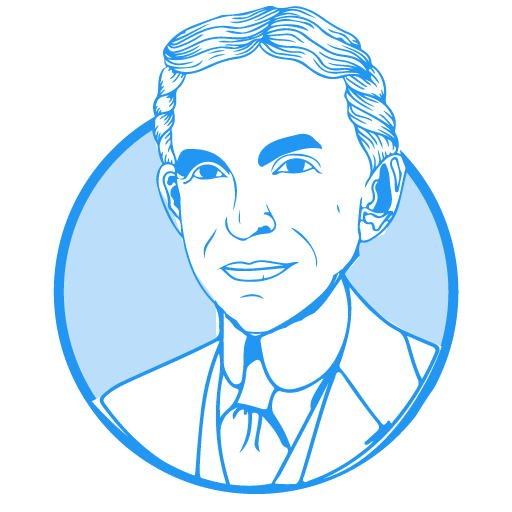 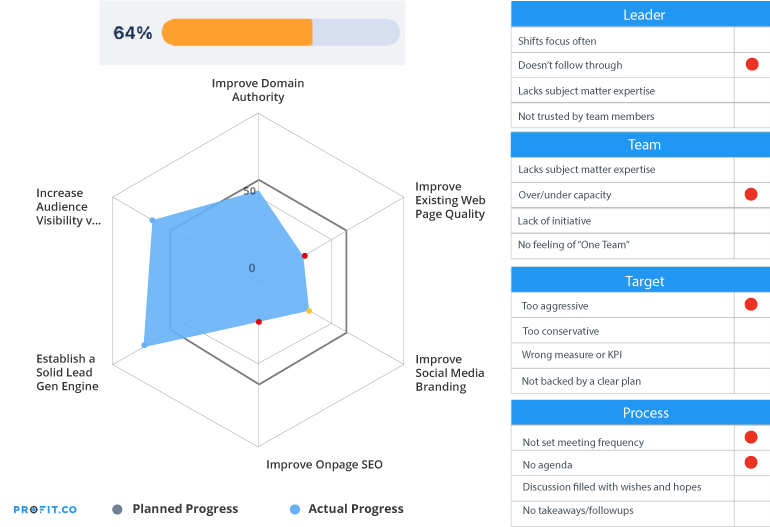 This radar chart indicates that there are six OKRs for the Marketing Department. As you can see, three of these OKRs are progressing either on-track, or are exceeding expected progress. The other three OKRs are lagging behind. While it’s possible to recommit and catch up on progress, it’s important that you analyze the cause of this imbalance, and attempt to correct it from the source so that your future OKRs are stronger.

The very first issue with the goals on this OKR level should be obvious– they did not follow the rule of five, that suggests that each level commit to between three and five OKRs and dedicate their time and resources to fulfilling those OKRs.

Outside of that issue, however, there is still drastically unbalanced progress on this radar chart. Let’s take a look at the potential reasons behind this imbalance.

If a team is led by a leader that doesn’t follow through on projects or have the persistence to drive productivity, OKR progress could look something like the third OKR in the above example, “Improve Social Media Branding”.

As you can see, progress is not at zero– there has been some movement on this OKR. However, it seems to have stalled out at the halfway point. It could be that the progress made was a collection of smaller tasks and projects that did not deviate too far from the regular day-to-day responsibilities of the team members working on the OKR.

However, there was no follow up from the leader, or a push to do more. Now, a few weeks from the end of the quarter, progress is leagues behind where it should be, and the OKR will most likely not even reach the 70% threshold expected of a stretch OKR.

Ready to start your OKR Journey for FREE?

An issue with over or under capacity could also be the reason behind the imbalanced progress we see on this radar chart. These six OKRs for the marketing department should be split among the team in such a way that allows every initiative to have the resources and people it needs to succeed.

We can see that is not happening on this radar chart. For the OKR to “Establish a Solid Lead Gen Engine” we can see a lot of people were dedicated to this job. Maybe the team produced ebooks for their lead-gen engine, and committed time, effort, and resources to getting this done. While this is a vital OKR to make progress on, the team is overshooting the expected progress significantly.

Meanwhile, the OKR to “Improve Onpage SEO” is severely lagging behind expected progress. While a large group of department members and department time has been dedicated to establishing a lead gen engine, the onpage SEO initiative has been left in the dust, perhaps left in the hands of only one or two people, when it was meant to be a team effort.

What happens when a target surpasses “ambitious” and becomes “unachievable”?

It will probably have the look of the third OKR on this radar chart- “Improve Social Media Branding”.

This issue has everything to do with team communication and the planning stage of the PEEL cycle for OKRs— where companies plan, execute, engage, and learn during their OKR program. During the planning phase of the PEEL cycle, teams and leaders are meant to honestly communicate about priorities for the quarter, the bandwidth of the team, and what everyone wants to achieve. OKRs should contribute to overall company goals and priorities, however it’s still important to take stock of what is possible, and find a target that’s past a safe bet, but not completely impossible with the resources and constraints of the department.

For “Improve Social Media Branding,” it could be the case the key result targets for setting up new social media presences, engaging and growing followers, and collaborating with important thought influencers in your field were set too high. You might have achieved a great deal– but your radar chart will show little to no progress.

This isn’t an accurate reflection of the department’s progress. When something that seemed feasible and straightforward isn’t progressing as expected, it’s important to take a closer look at the way key results have been formulated, and what progress has been made so far.

When it comes to OKRs, touching base with your team is incredibly important. If you don’t have a great line of communication open, you might see situations similar to the second example OKR above– “Improving Existing Webpage Quality”. This OKR made some progress, but has stalled completely, lagging so far behind expectations that catching up will be incredibly difficult. What went wrong here?

First, if there’s no consistent meeting frequency in your department, you might see an OKR like this one. This department has six important OKRs to look after. If team members don’t know what to do on one of their priorities, chances are they will move on to another and make an impact where they can.

Worse, if there’s no set meeting frequency, there’s no space to follow up on this. So, individuals might explain in their check-ins that they’re stuck, but if there’s no follow up, or meeting to coordinate with team members and make a game plan for progress, then there simply won’t be any movement on this initiative.

Let’s say you do have weekly meetings. This doesn’t necessarily mean the problem will be fixed. Even with weekly team sync-ups, you might still see OKRs like “Improve Existing Webpage Quality”. Why?

It could be because your meeting, even though it is scheduled, doesn’t have a set agenda. The team might be so busy discussing what progress was made and explaining day-to-day issues that they forget to touch base about the OKR that no one has been able to make progress on.

That’s why Profit.co suggests following the PPP meeting method. This gives a structure to your meetings; here, you first touch on the progress that has been made, then the plans you have moving forward, and finally the problems that came up. This gives teams a framework to cover all the topics that need to be discussed within the meeting time, so nothing gets left behind, and important OKRs don’t go untouched for weeks on end.

The radar chart gives you a simple overview of OKR progress that helps you immediately identify what area of your OKR program is not progressing as planned. Once you identify this area, you can take a closer look at what is impacting that progress.

If your progress in one area is falling behind, it’s possible for you to make up the gap. However seeing OKR progress laid out on this type of chart gives you the opportunity to identify issues that are impacting progress in your organization, make adjustments, and learn from these experiences.

Similarly, you can also see what you’re doing right. In examining OKRs that are on track, you can see what kind of resources, personnel, and effort is allotted for these goals, and can try to replicate that success with other OKRs.

With a radar chart overview of your OKRs, you can get a simple summary of both planned and actual progress that can help you identify issues, track what’s working well, and determine what teams need support and attention in a quick, comprehensive manner.

Identifying what exactly is going wrong in your OKR program means that you are well on your way to solving your issue and getting your OKR program back on track. It’s important to note that a large part of succeeding with OKRs is being willing to identify your mistakes and learn from them! Getting back to the OKR basics and making sure your team is meeting the baseline standards for a solid OKR rollout is a good place to start your task of recalibrating and re-balancing your team.

Using case studies to help demonstrate what potential issues might look like played out on radar charts can be helpful for identifying these issues in real life for team members and leaders alike.

For another example of an unbalanced radar chart and an exploration of what issues we see played out, see our next case study in this series: